I recently received an email from a colleague asking me about digital fiction workshops. (FYI, while I don’t have workshops scheduled at the moment, Dreaming Methods does.) While I do think in-person workshops are ideal, let’s face it: writing retreats aren’t offering courses in DF yet, and the few of us who write and teach it can’t be everywhere! A quick Google search showed me that the only articles written on the topic were written by yours truly, and never in sufficient how-to depth.

This is Part 1 of what will be a planned 9-part series on how to write digital fiction. END_OF_DOCUMENT_TOKEN_TO_BE_REPLACED

In this last episode of the season, we revisit some topics to explore them further, including: digital fiction museums, locative transmedia works, publishing digital fiction, walking sims, and the future. BONUS: Blooper reel! 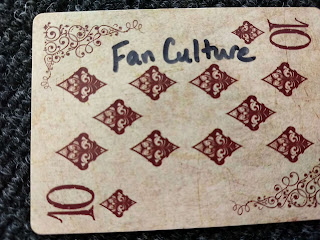 The shortlist has been posted, and the voting is open until 30 July 2018 for the People’s Choice award for the 2018 Opening Up Digital Fiction Writing Competition. Go have a read of some great digital fiction, then let us know which one you think deserves the top spot.

Why isn’t digital fiction everywhere? Part of the reason we don’t see it in stores is because it doesn’t have an established publishing stream. We look at some of the publishing efforts in the history of digital fiction in this episode. 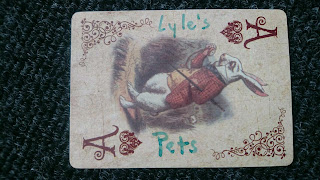 Buy it on Amazon now!

It’s here! We launched Normal Deviation this past Saturday (write-up to follow on the Normal Deviation blog; visit our Facebook page for a video of the livestream), to much applause. It’s been a fantastic learning curve, but we’re so happy to have the book out on time, with 24 absolutely fantastically weird stories.

It’s available in all Amazon stores in paperback and ebook. Get your copy, leave us a review, and let us know how you like it!

Inanimate Alice is a series of narrative shorts, originally starting as works of hypertext fiction but having since put a foot in the world of video games – not too unlike Alice herself. Starting in 2005, each episode of the series tends to revolve around Alice having a mildly unsettling adventure, and new instalment Perpetual Nomads is no deviation from this pattern.

Having woken up on a bus that immediately breaks down, Alice Field is tasked with finding a port to charge her phone from whilst being bothered by two new online “friends”. The main dialogue of the game is delivered by these “friends” persistently arguing over a conspiracy theory inside Alice’s phone, despite a potential player choice to refuse their friend requests.

The game is designed to be experienced in VR (although it’s also possible to play it on a regular PC) and having played both versions I recommend setting it up for VR if you have the means to do it. Even something as simple as waking up on the bus and hearing the sounds of the world emerging around you feels more real whilst wearing a VR headset, increasing immersion and as such making for a more enjoyable playthrough. However, if you’re only able to play a desktop version (or prone to motion sickness) then don’t be discouraged; it’s still an interesting narrative to explore.

In some previous instalments of the Inanimate Alice series, the narrative tended to be accompanied by a game element (such as collecting the Russian dolls in episode three); in Perpetual Nomads your main interaction is examining litter and graffiti to learn more about the world around you. You could potentially travel through the game without looking at any of the posters and other aspects of the environment, but you’d be missing out on the most interesting parts of the experience.

My only real qualm with Perpetual Nomads is Alice’s involvement in the Whispurring Nomads chat. More than half the time that Alice responds to a message from the other two characters, she types out an ENTIRE message only to erase it then type and send a completely different message. On some occasions she types out two whole messages and deletes both of them in turn before settling on something to say.

It’s obviously important to the narrative to explore Alice’s inner thoughts on the situation, and this is sassy dialogue that perhaps she wouldn’t necessarily say to another character, but when Alice’s inner thoughts are already portrayed through blue speech bubbles that pop up on screen there’s no reason these bubbles couldn’t be utilized alongside the narrow chat box, in my opinion. In turn, if Alice was to type out and erase maybe only one or two messages instead, that would make the temptation to be rude to her new “friends” in those instances seem more effective overall.

Otherwise, Inanimate Alice: Perpetual Nomads offers a unique storytelling experience, not only as a learning tool to teach children about the use of video games to convey narrative, but also as a narrative itself. Perpetual Nomads is a sub-adventure taking place between episode six and the as-yet unreleased episode seven, padding out a conspiracy around the use of oil in this world and those who control it. The open end and small twist taking place after the credits will increase your intrigued in the overarching narrative of Alice’s life and whet your appetite until episode seven arrives.

VR was viewed on the Oculus Rift System.

We finally get to talk about our favorite topic: writing digital fiction! What are the most frequent questions we get as digital writers? How is it different from prose writing? How is it the same? Since we’re practice-based researchers in creative writing, these are just the sorts of questions we are looking to answer in our creative work. 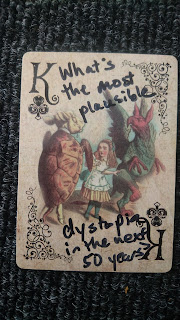 Our deepest apologies for the unplanned hiatus! As working academics, end-of-the-year marking and administration tasks overwhelmed us for a while.

Digital media has the ability to both transcend and combine narrative forms: film, game, text, music, and more. As a result of the mutable quality of digital media and the networked capability of the internet, narratives now spill over multiple media, with different elements of the story spread across film, forums, TV, books, and more. We go down some transmedia narrative rabbit holes, discussing what transmedia storytelling is and how it’s being used. 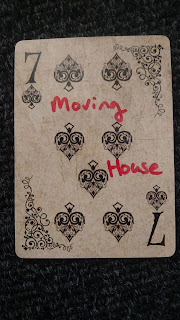 Note: It appears the podcast feed wasn’t coming through to this site – sorry for the slew of updates, but didn’t want anyone to miss out on episodes!

Like all things digital, digital fiction is prone to obsolescence, and we’re already losing key works. We chat about the evanescence of the medium, archiving digital fiction, and what we do as writers to make our works accessible for as long as possible – and whether we should even bother. 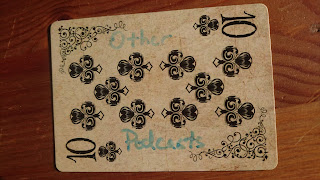 See Lyle’s profile and work on her website, and Jordan’s research and writing musings here.

Many thanks to Bangor University’s School of Creative Studies & Media for use of their recording equipment and support of this podcast.Produced by Lyle Skains & Jordan Glendenning. Music from Kurt James Werner.